Only quality software from Eolsoft

Bothered by this strange e-mail attachments like winmail.dat, at00001.dat? Here is the tool that can show their contents without asking the sender to re-send e-mail in other format. Freeware, small and handy - Winmail Opener. More about Winmail Opener »

Have a collection of flash movies or cartoons? Want to play SWF files, flash exe projectors in standalone player with advanced capabilities such as rewinding, full screen mode and play lists? Free and small, Flash Movie Player is for you! More about Flash Movie Player »

Have you ever been tired of navigating Windows registry to perform just another tip or tweak for your system? Basta! With Registry Jumper, you will only need to enter or paste your registry path, hit "Jump", and the program will navigate registry editor RegEdit to the desired key. Registry Jumper is small and completely free. Moreover, Registry Jumper saves each path for later use, supports command-line launching and can handle custom protocol calls (regjump://) to launch RegEdit from URLs. More about Registry Jumper »

At long last, the new version of Flash Movie Player is out!

We haven't updated our Flash Movie Player since 2008. A lot's happened since then, including the notorious Adobe Flash Player End Of Life. We found the workaround and pleased to introduce you the updated Flash Movie Player 2.0.
15 March 2021

After a long break, we are back with the updated version of Winmail Opener! Fixed issues with running as administrator and crash when DEP was enabled. In addition, the application menu design has been improved.
16 November 2017

Just for reference, here is our software download statistics from Download.com, which is our main, but not the only download location: 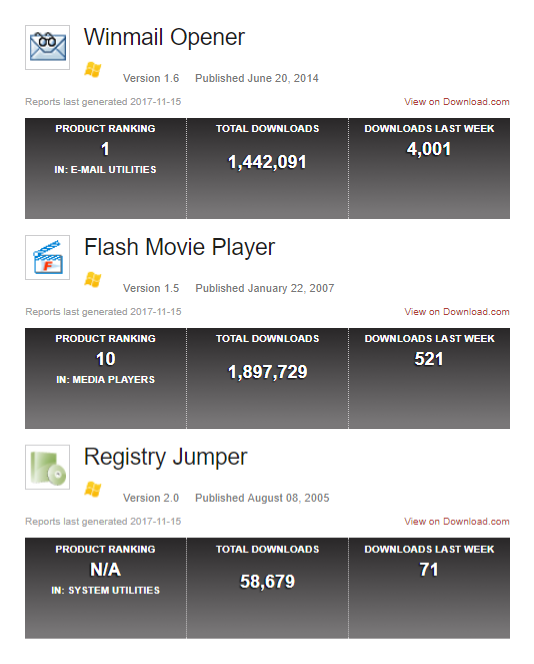 Exe packer updated, which should prevent DEP false positives in the latest versions of Windows.
25 May 2014

Winmail Opener 1.6 has fixed hanging on some kinds of files and improved attachments extracting algorithm.
21 October 2012

We've made some tweaks and bugfixes, check them out: Changes list.
07 January 2007

Added ability to save rtf message while working in command-line (silent) mode. Winmail Opener homepage.
30 May 2006

Some improvements made, some bugs fixed.
09 March 2006

Winmail Opener is a small and simple utility that allows you to view and extract contents of TNEF-encoded messages (infamous winmail.dat). That means if you receive winmail.dat on your e-mail, with Winmail Opener you can view the rich text message contents and attachments embedded into this file.
28 September 2005

Flash Movie Player is a free stand-alone player for ShockWave Flash (SWF) animations, based on Macromedia Flash Player plug-in. In addition to all Macromedia Flash Player abilities, it has some extended features, such as animation rewinding, advanced full screen mode, exe projectors support and play lists. More about Flash Movie Player..
10 May 2005